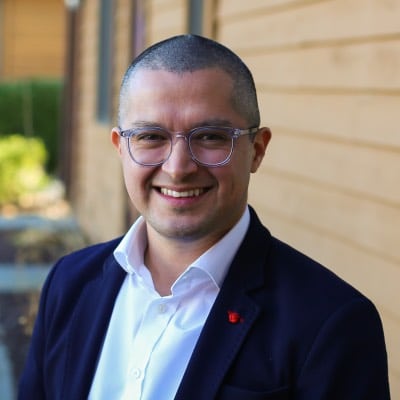 Today, we are joined by Gerson Martinez, who is the son of two immigrants from El Salvador that settled in rural Maryland. As the only Latino student in his schooling growing up, Gerson had a difficult experience that shaped his views and future career choices. Both of his parents started small businesses to help raise Gerson and their main goal was to get him an education in order to obtain a financially stable job.

After graduation, Gerson was able to secure a job on Wall Street at Morgan Stanley. Even though this was his first job, this was beyond his imagination of what he believed he could accomplish in his career. He dove into work and rose the ranks in an incredibly demanding work environment. Around two years in, he got married, which changed his relationship with work. He felt like he was spending all of his time at work and not with his wife, Sam. They both had a conversation that this is not what they wanted or needed for their life and it was ok for him to quit.

It took Gerson 3 years to officially quit because he had worked so hard to get to where he was. The final straw was at his grandfather’s funeral, where he saw the impact that his grandfather had on so many peoples’ lives. He thought to himself he was not making an impact in his current job and he needed to find his purpose. At that time, he quit without a plan of what was next.

Within one month of quitting, he was offered a job in the finance department and his wife was offered a teaching job at Brilla Charter School. It was a brand new school in the south Bronx, which is one of the poorest school districts in the country. They spent three years there helping build the school into a model that is now expanding into other cities. Their students ended up testing higher on standardized tests than other private, public, and charter schools in New York City. Gerson finally found the purpose and impactful position he had been searching for.

As Gerson and Sam were starting a family, they wanted to move closer to their families. They moved back to Maryland temporarily, but have been there ever since. Gerson realized his hometown had drastically changed since he left. The school district was now a large percentage Latino. Gerson and Sam wanted to provide an example for these kids with someone who has been through the same experiences as them. Around this time, an opportunity opened up for Gerson to become the executive director at Talbot Mentors. They empower kids between 6 to 18 by connecting them with individual mentors, providing academic support, and developing soft skills for their life-long success.

Gerson eventually left Talbot Mentors after 4 years this past December to follow new ventures. When working in the non-profit space, he struggled with the in-balance of financial security and financial power for minority communities. He is now working towards the goal of finding ways to create more focus financial balance and equity rather than charity. It is inspiring hearing him combine his different experiences to work to change the status quo.

If you are interested in connecting with Gerson, please reach out to him on Linkedin!

Listen to Gerson share his story and get inspired with his amazing advice to people thinking about following a similar path. Check out the full conversation on YouTube or Spotify by clicking the links below.